What does that mean for Oath: Chronicles of Empire and Exile? Well, mostly good things.

Oath: Chronicles of Empire and Exile is a one to six player strategy board game where players will guide the course of history in an ancient land. They might attempt to bolster the power of the Chancellor or scheme to bring the kingdom to ruin. The consequences of one game will ripple through those that follow, changing what resources and actions future players may have at their disposal and even altering the game’s core victory condition.

My wife and I have been playing designer board games for nearly a decade now, and like a lot of others, we broke into the hobby with Catan. (However, I did play Talisman and D&D long before that; but I don’t lump those two into the same hobby.) Over the years, I have watched my wife’s responses to various board games closely. Like a board game sommelier, I have tried to bring a gaming experience that kept her coming back to the table. However, I knew that Oath would challenge her. She is a die-hard worker-placement, euro-gamer. She likes creating engines that are optimized whose efficiencies outclass those around the table. So when she told me after a 5+ hour learning game (our first game too) that she liked it, I was surprised. I had knew that she wouldn’t.

Oath takes place in a fantasy(?) world of an established Empire that tries to lure exiles back into citizenship and also remaining. Other players might have a vision to achieve a legacy written to the pages of the game’s history. It is the narrative that this game attempts to capture; a kind of experience. The Playbook asks the teacher of the game to read this to new players:

Oath is a game about history. It’s about what gets forgotten, who gets left behind, and how power moves from one part of society to another. In each game, players will steer the fate of this land toward their own interests, affecting all the games to come.

It’s important to keep in mind that the game’s goal is to create a memorable narrative that you and your friends come back to in order to relive those moments.

The first that that Oath does is pull you in. The art, by Kyle Ferrin, is playful and whimsical. However, there are times that the art is capable of communicating a bit of darkness and mischief. There is a depth in the childlike art. The color of skin tones is diverse; the shapes and sizes of the components are inviting and beg you to reach out and touch them. Chunky pieces, squishy mat, crisp cards, and custom dice all feel like luxury. The shapes and sizes are also in the same design language, and the end result is a compelling game, begging you to open it and start playing. 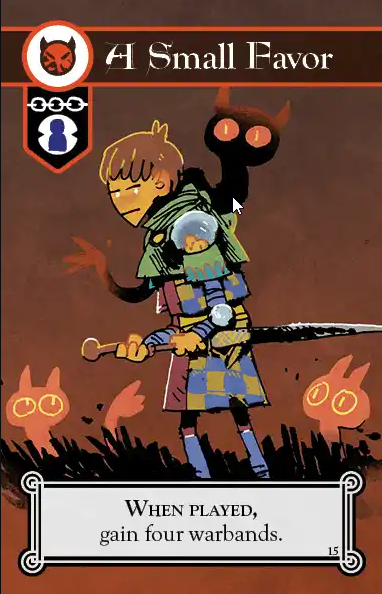 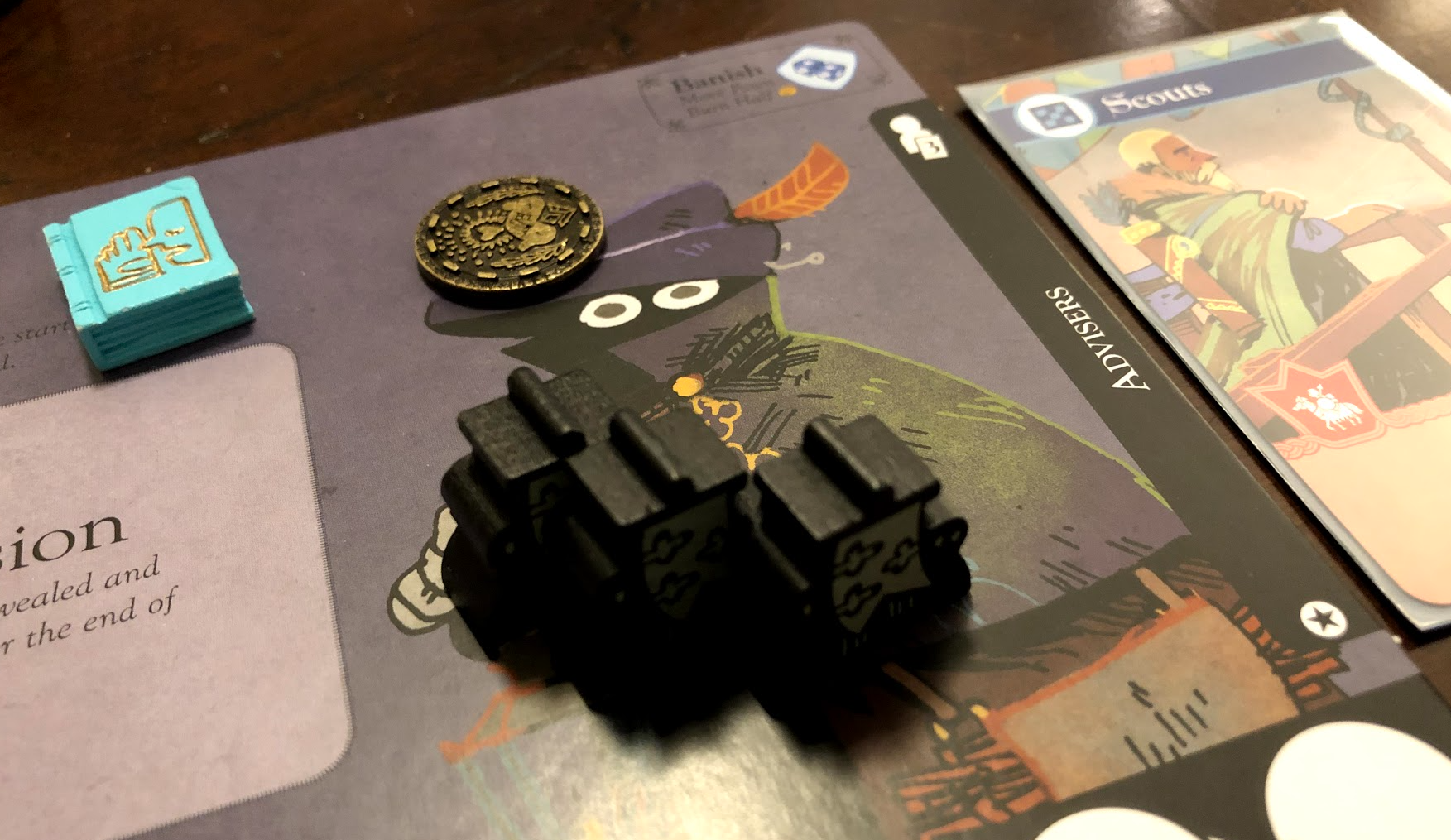 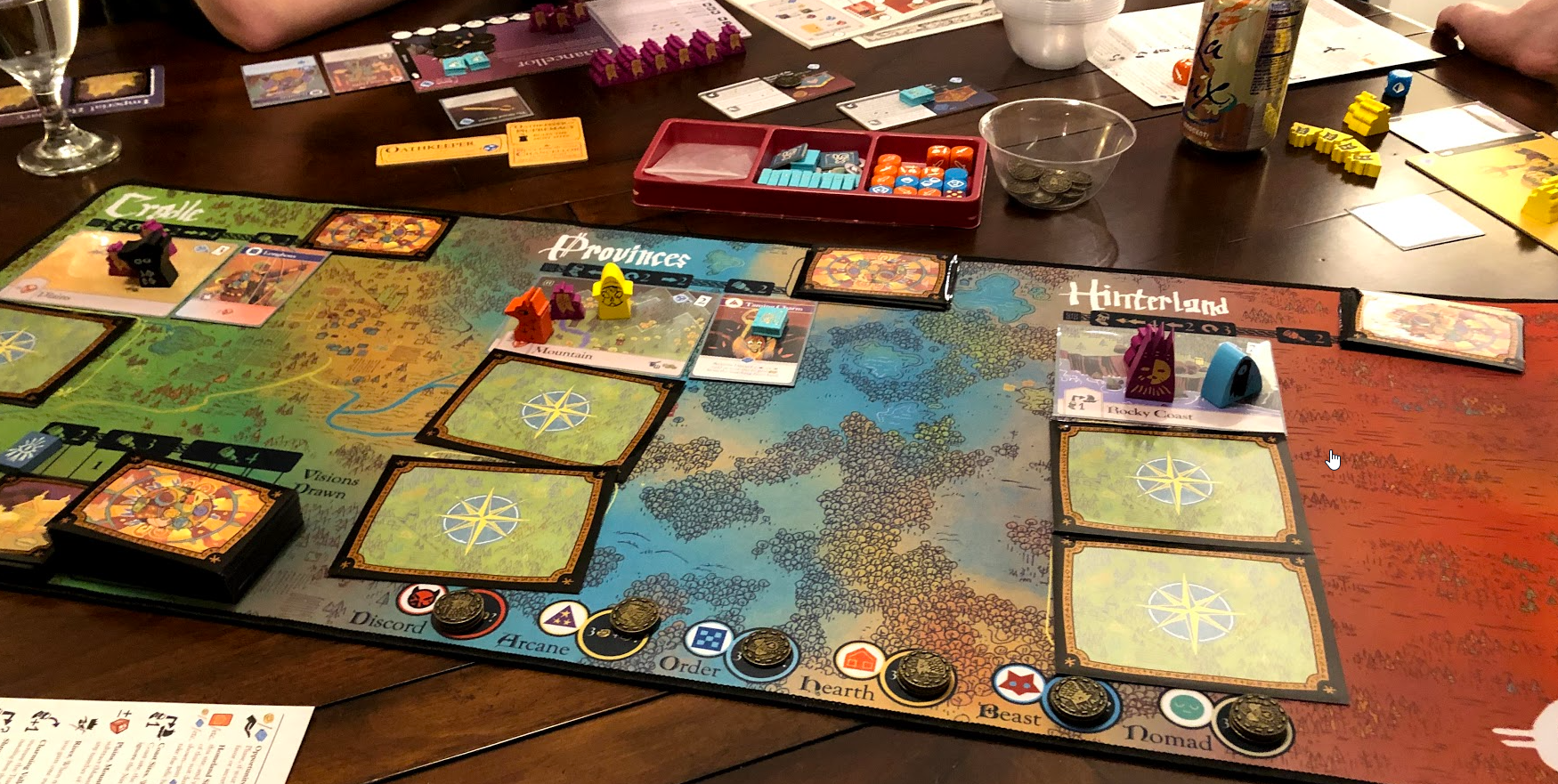 The game plays over 5-8 rounds. They are full rounds. In the first round or two, the game’s open nature doesn’t tell you what to do, and you can feel as though you have no direction; the open nature is a little disorienting. However, once you make a decision or two, you begin to see that the game’s design is tight. A lot of consideration has been expended on timing and the nuance between the two main currencies of the game, Secrets and Favors. After another exile made a Faustian bargain, gaining 4 new warbands and then quickly move to rule many of the world’s sites, I began to search the world for a vision. (A new victory condition.) Other exiles did the same, and soon we began to take the necessary actions to prep the world for our individual victories.

During this time, it took work to get to where any one of three exiles (all having visions at this point) could win the game. Seeing the mounting threat rises, the other players worked together to ensure that their victory condition didn’t get met. Consequently, not only I, but all the other exile players felt close to victory, only to have it snatched away at the last moment.2 Challenging gameplay for sure, yet compelling narrative. Once the game’s story arc for my character was completed, ultimately failing to win, I was entrusted with deciding who would help win (or not win.)

Make no mistake, this game’s primary mechanism is kingmaking. It has all the pros and cons of a game that is subject to that design. There is no game if those at the table suddenly decide they don’t want to win. The delicate balance of the game hinges on its ability to convince you to keep playing. There were many times near the end of the game that I could objectively see no path to a victroy for me. That left me with embracing that narrative and participating in writing this game’s story or checking out.

For sure, I knew my wife hated her experience. There was even one point she turned to me (late in the game) and whispered, “It’s a bit like Talisman.” I knew what that meant; that it felt like the game would never end. At that moment in the game, her story arc was like mine, it had risen and climaxed; so close to a win, but the other players rallied to prevent it. She was now made to either engage in deciding who to help push (or prevent) into victory or stop caring. When will it end was her sentiment.

Here’s the thing. After the game, we all debriefed, chatting about some of the great moments the evening had offered. I turned to my wife and asked, “Did you like it?”

I was surprised. I probed further, “What did you like about it?” She began to narrate what happened in the game, going over the story we all had experienced. Talking about what could’ve happened if other decisions were made. She was engaged.

A day later, when we were floating in the pool, out of nowhere, Wifey said to me, “You know, if that game goes like it did last night for another time or two, I wouldn’t want to play it again.”

You see, Oath had succeeded at its stated goal. It told a story. Wifey was still thinking about the game and wanted to know where the story went.